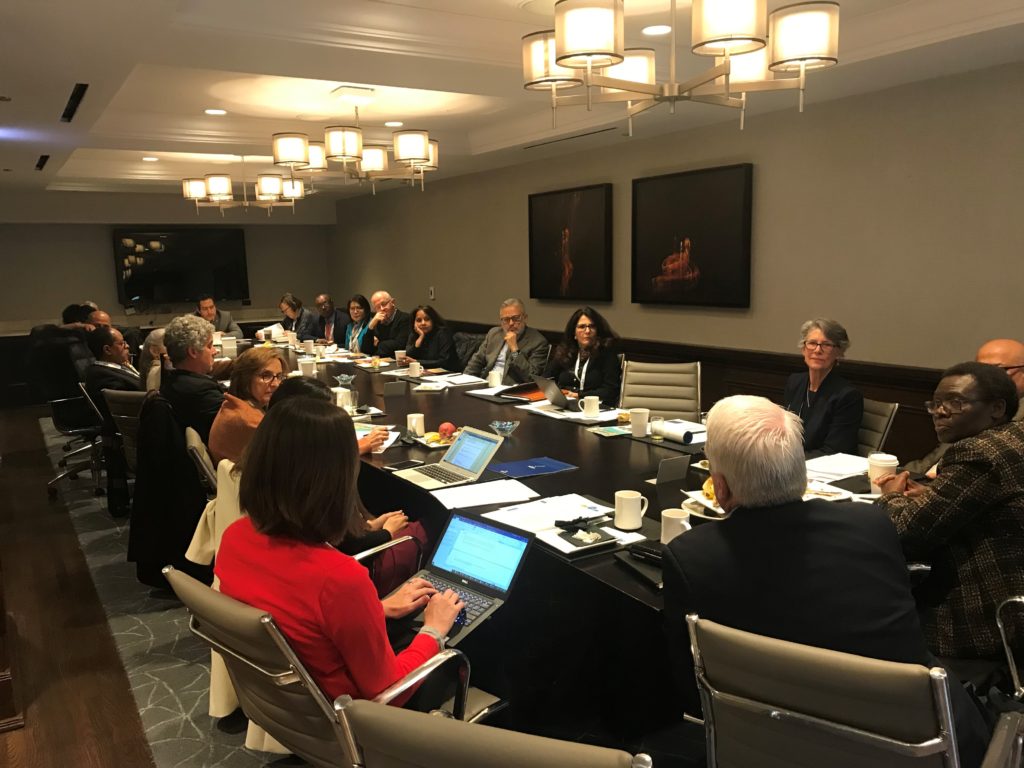 In March, the HEARD Project organized a roundtable discussion on the sidelines of the 10th Consortium of Universities in Global Health (CUGH) Conference in Chicago, bringing together over twenty Deans and Directors from university research institutions and key implementing organizations to discuss the opportunities to collectively address some of the key challenges in the implementation science (IS) field. The topic of this year’s CUGH Conference was Translation & Implementation for Impact in Global Health and as such, the Deans and Directors discussion was synergistic with the agenda and activities of the weekend conference. Dr. Stefano Bertozzi (UC Berkeley School of Public Health), a co-lead of the meeting, challenged the group by asking, “What is the big thing that we need to advance IS, and what is the role of the Academic community in contributing to that?”

This year’s roundtable meeting at CUGH was an outgrowth of the previous “Deans and Directors Roundtables on Implementation Science”, which had met twice before at the 9th annual CUGH Conference in New York City and at the 5th Global Symposium on Health Systems Research (HSR) in Liverpool. This year’s meeting included members of the original Roundtable including Dr. Bertozzi, Dr. Ayman el-Mohandas (CUNY SPH), Dr. Sabina Rashid (BRAC James P. Grant School of Public Health) and Dr. Asri Adisasmita (University of Indonesia) — but expanded to include a much larger cohort of peers both to bring coherence to the existing workstreams in implementation science, and in anticipation of the role this group could play in the Implementation Science Collaborative (ISC). As explained during the discussion, the ISC, which USAID is providing seed funding to launch, is not a new fund, but will operate as an on-line community of practice and serve as a neutral convening hub to create long-term diverse IS partnerships both to address specific health challenges and to create global goods needed the strengthen capacity in the IS field.

During the discussion, participants agreed that while IS is the “signature science” of global health, with the guiding principle that evidence generated through public health research should be both useful and used, at the same time it is a field that has eluded easy definition. As one participant noted, in the United States, IS has a health service and clinical focus, while globally there is a greater focus on needs at a policy and programmatic level, with an emphasis on national translation. However, in spite of the lack of a single definition, there is a lot taken place in the field, particularly in online education, training and capacity building. At the University of North Carolina at Chapel Hill (UNC-CH) Gillings School of Global Public Health, a new MPH curriculum in which IS was recently launched. The University of Washington has a highly competitive PhD program in IS, and also offers on-line short courses which are offered in Seattle, Nepal and Kenya that are so popular, the University has to turn away requests for them. UCSF and Johns Hopkins University are also developing global core competencies and curricula geared towards IS. Representatives from BRAC James P. Grant School of Public Health reflected on how their school has been teaching about the science of implementation since the 1980s, even before the phrase was coined.

The group agreed that despite the growing interest in the field there remains a need for common curriculum, case studies, and further exploration into common definitions, shared platforms, and increased funding for such initiatives. In fact, by the end of the discussion, participants agreed that the most important opportunities for continued work for this group are the work it can do together in joint advocacy including:

With many areas to potentially explore in the nearer term, the group will plan to reconvene this summer in Bangladesh on the sidelines of the BRAC’s Global Conference on Implementation Science & Scale-up, and next year at the CUGH Conference in DC — potentially as an organized Satellite session – to continue ISC discussions around the engagement of academic partners in  supporting the IS community both at home and abroad.